This list is an offshoot of Video Games of Note which is dedicated to games for that 6502-based home computer system, the Apple II. Or Apple ][. Or Apple ][+. Or Apple //e.

The epithet "Russki" seems pretty dated, not to say obsolete, now, but there was a Cold War on at the time, you know!

I like how the signs on the streets helpfully tell you that they are ONE WAY.

I didn't know quite what to make of this game at the time, and I still don't. Knowing now that it was a tie-in with Olympia beer (which was apparently a real beer company) and that the Artesians were licensed characters makes it make a tiny bit more sense, I guess — but not a lot.

I mean, I guess the action takes place on the outside of a building? On ledges? Or just in a really really narrow building? Because the protagonist sidles left and right, always facing away from the player.

And catches beers that fall from the sky inexplicably. Were they launched out of the blimp that flies above the buildings that is revealed once the protagonist makes it to the top of the building?

Was this an attempt to package a bit of college humour in a video game?

Perhaps if I were to research Olympia beer and find out what their advertising with Artesians was like, I'd be able to answer that better. But to be honest, I'm not really motivated to. 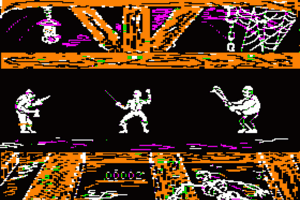 The weird contrast between the coloured background vs. the black-and-white (or green, as the case may have been, on the monochrome monitor on which I saw it) figures of the characters makes it stand out in my mind.

Sort of "Asteroids with walls", but moreseo. The omnidirectional scrolling and physics made it seem very high-concept (to me, at the time.)

And considering that the Apple II did not have any sophisticated graphics hardware to support the omnidirectional scrolling, the software to implement it is probably pretty impressive. I imagine it computes what parts of the screen need to be updated (but I haven't researched it so this is just a guess, I don't really know). 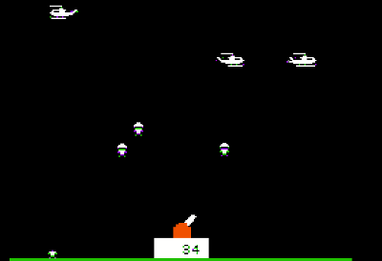 Something quite strange about being able to steer your shots.

If you are more familiar with IBM PC games, you might know of Paratrooper, which was a clone of this game.

But Penny Arcade is also notable for being one of the few games I remember having a copyright date in the 1970's — the other being Dart Room.

OK, so this is actually only listed here because there was a demo called "Kill Sammy" which used the assets from Sammy Lightfoot, but instead of being the game, let you select from a menu the way in which Sammy should meet his demise (laser, being squished by something, etc.)

You can see "Kill Sammy" online @ archive.org or watch a video "walkthrough" @ youtube.