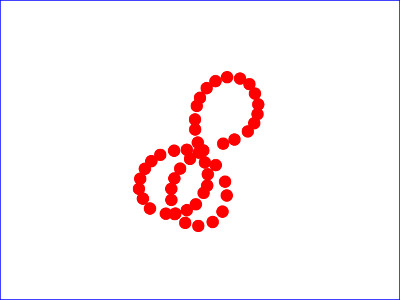 This is the reference distribution for Cyclobots, a dynamical system desk toy automaton thing put together by Chris Pressey in 1994. It consists of a number of virtual turtle robots called "cyclobots". Each cyclobot moves forward with a constant velocity, but constantly adjusts its trajectory to try to follow exactly one other cyclobot. No cyclobot is followed by more than one cyclobot.

A group of cyclobots tends to fall into one of several semi-stable patterns. The simplest of these is just a rotating circle, but more complex, trefoil-like patterns are common.

You can watch it online here: Cyclobots installation at catseye.tc.

To run it locally, clone this repository and open demo/cyclobots.html in a web browser such as Firefox. (Note that, if opened as a local file, the browser may fall back to canvas rendering; to ensure that WebGL is used, you can start a local server, but to be frank it doesn't seem to make much difference at this stage.)

The core behaviour is implemented in src/cyclobots.js and does not rely on PixiJS or any other display layer.

The first implementation of Cyclobots, now lost, was in Visual Basic 3.0, in 1994. (Let's call it version 1.0.) Some things it supported that subsequent implementations haven't yet replicated include:

In 2013, Cyclobots was re-implemented in Javascript, and this implementation resided in the HTML5 Gewgaws distribution. (Let's call this one version 2.0).

In 2019, this Javascript implementation was cleaned up and re-fitted to use PixiJS, and that is the version in this repository (which we will call version 2.1 or greater). Since PixiJS uses WebGL when possible, this version has the potential to have much nicer visuals than the previous versions; however, it is still a work-in-progress in this regard.