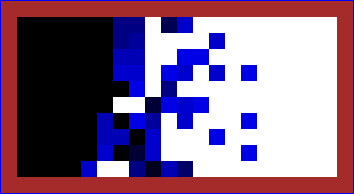 This is the reference distribution of noit o' mnain worb, a probabilistic particle automaton devised in the year 2000 and described (awkwardly) in the next section.

It contains the reference implementation, as a Perl script which uses the (included) Console::Virtual library, in the script directory.

It also contains an implementation in Javascript/HTML5, using modules (also included) from yoob.js, in the impl/worb.js directory.

The noit o' mnain worb language is a probabilistic particle automaton based on brownian motion (or entropy).

A noit o' mnain worb runtime has an orthogonal gridwork playfield (of any reasonable size or number of dimensions) which is populated by any number of bobules. Bobules are solid elements in this grid — that is, no two bobules may occupy the same location. Bobules are also capable of motion — in fact they can hardly avoid it — and it is important to note that they are stateless. As such, they have no idea which direction they are going, nor what they are going to do when they get there.

Each time quantum, or tick, each bobule chooses an adjacent square to move to, at random (in two dimensions, that's 8 possibilities plus the possibility of not moving = 9 possibilities.) If, during some tick, this randomly-chosen new location does not allow entry — that is, if it is already occupied by a solid element (a bobule or a wall) — the bobule does not move during that tick.

[Implementation note: each tick that a bobule is blocked from moving, its "pressure" increases, although this is merely for visual effect.]

The playfield is made more interesting by the addition of:

[Historical note: In version 1.0 (Jul 5 2000) of the language, which was released only on the Cat's Eye Technologies Mailing List, +- had much different (and much more myopic) semantics than they do in v1.1.]

The sources and sinks are simply convenient 'macros', so that you can build something like:

Using the + sources and - sinks simply saves you from specifying large chambers of bobules or emptiness explicitly.

[Implementation note: It is not the intention of the + element to violate entropy, but the fact that, in the reference implementation, + keeps producing bobules indefinately at a uniform rate of 10% chance per tick does bend the rules a bit. In a more "entropically correct" implementation, the chance per tick should decrease over time. Note that the language proper does not specify any particular rate of bobule creation, but encourages implementations to be flexible on this point.]

The ! loads simply cause the implementation to react in some noticable way when a bobule enters into their location, so that the noit o' mnain worb programmer can pretend to themselves that their bobules are 'doing something' during program runs.

[Implementation note: The reference interpreter simply outputs an ASCII BEL character when this happens. On most terminals, this affects a beeping sound.]

The idea is that the bobules, spaces, walls, and diodes alone constitute a (nearly) Turing-Complete system¹.

I say "nearly" because it's actually missing a dimension in this form. The noit o' mnain worb language isn't dimensionally-independent. Notably, it doesn't work in one dimension at all.

It almost works in two dimensions, but the fact is that if you do not address the 'wire-crossing problem' (see Befunge-93's # instruction), you cannot guarantee being able to connect two arbitrarily-chosen paths in two dimensions. You need to have a way for coincident paths to cross, which is not strictly just two dimensions anymore.

[Theoretical note: we suspect, but would surely have a hard time proving, that this limitation is somehow related to the four-colour map theorem.]

So, it really only works in three dimensions and above. For that reason, adding 'wormholes' to the noit o' mnain worb playfield is a possible future extension, to simulate three dimensions a la 'wire crossing'.

¹given a playfield which is initially populated with a suitable infinite pattern, of course, à la Wireworld and such.