"Chzrxl, the Living Inkblot." Or is it some sort of self-attracting lava lamp? 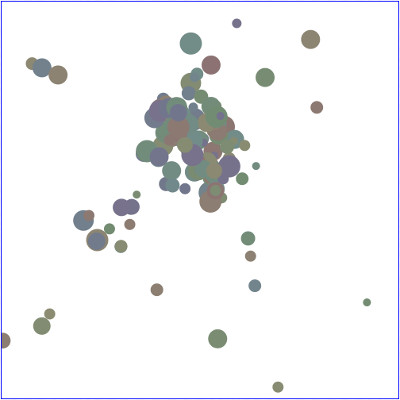 This is the reference distribution for Chzrxl, a dynamical system fluid automaton thing devised by Chris Pressey in 2013. It consists of a set of blobs where each blob sways back and forth between two points — the midpoints of two pairs of other blobs. Of course, since those four blobs are also moving, their midpoints move too, and the result can be quite complex and chaotic. In fact, in order to prevent all the blobs from converging to a common point, a certain number of the blobs (say, 5% of them) are typically held fixed while the others move around them.

You can watch it online here: Chzrxl installation at catseye.tc.

To run it locally, clone this repository and open demo/chzrxl.html in a web browser such as Firefox. (Note that, if opened as a local file, the browser may fall back to canvas rendering; to ensure that WebGL is used, you can start a local server, but to be frank it doesn't seem to make much difference at this stage.)

The core behaviour is implemented in src/chzrxl.js and does not rely on PixiJS or any other display layer.

The first implementation of Chzrxl was in Javascript, in 2013, and this implementation (which we can call version 1.0) can be found in the HTML5 Gewgaws distribution.

In 2019, this Javascript implementation was cleaned up and re-fitted to use PixiJS, and that is the version in this repository (which we will call version 1.1 or later). Since PixiJS uses WebGL when possible, this version has the potential to have much nicer visuals than the previous versions; however, it is still a work-in-progress in this regard.